Efficacy of treatment of acute herpetic stomatitis. Clinical and immunological parameters of oral cavity in children 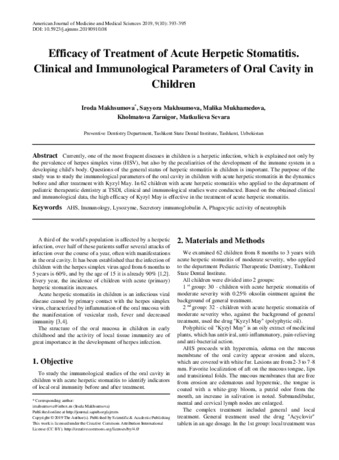 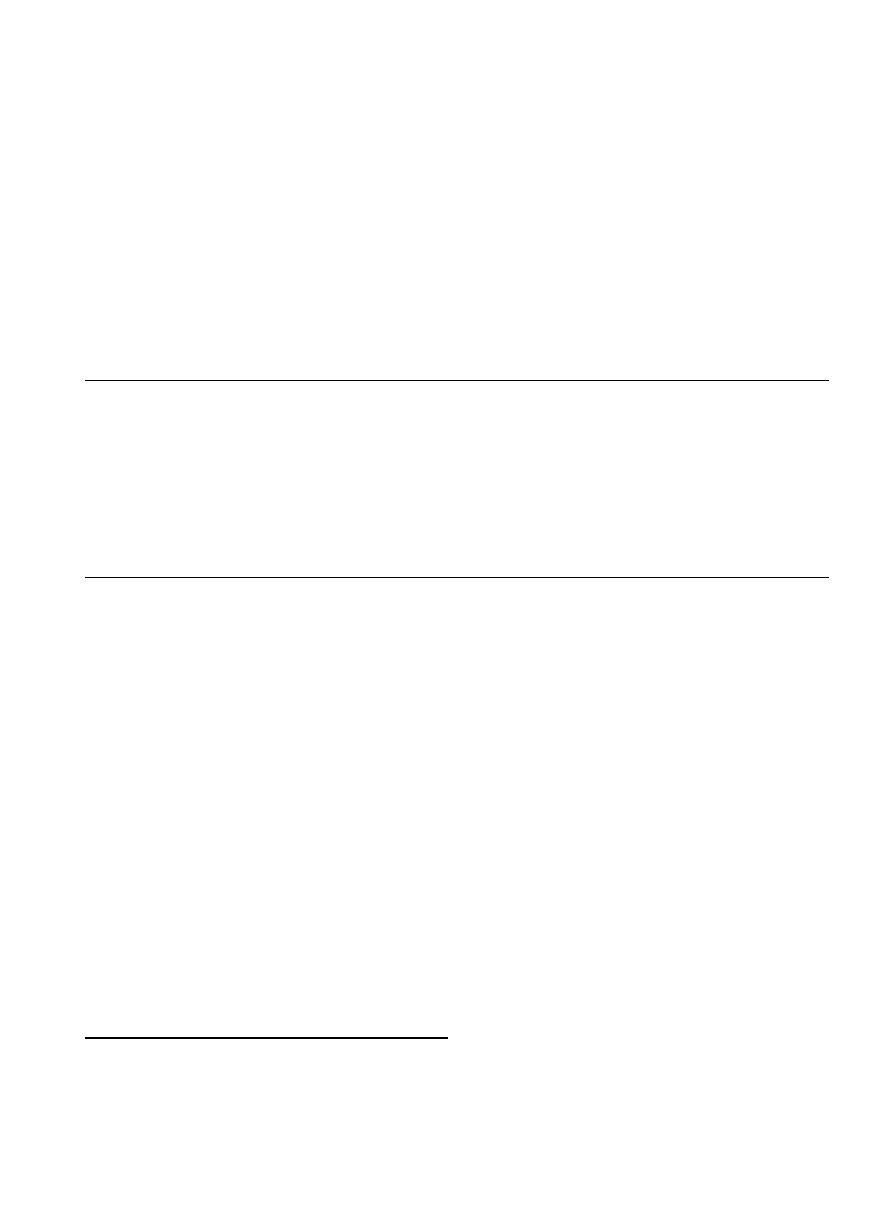 Clinical and Immunological Parameters of Oral Cavity in

Currently, one of the most frequent diseases in children is a herpetic infection, which is explained not only by


A third of the world's population is affected by a herpetic

infection, over half of these patients suffer several attacks of
infection over the course of a year, often with manifestations
in the oral cavity. It has been established that the infection of
children with the herpes simplex virus aged from 6 months to
5 years is 60%, and by the age of 15 it is already 90% [1,2].
Every year, the incidence of children with acute (primary)
herpetic stomatitis increases.

Acute herpetic stomatitis in children is an infectious viral

disease caused by primary contact with the herpes simplex
virus, characterized by inflammation of the oral mucosa with
the manifestation of vesicular rash, fever and decreased
immunity [3,4].

The structure of the oral mucosa in children in early

childhood and the activity of local tissue immunity are of
great importance in the development of herpes infection.

To study the immunological studies of the oral cavity in

children with acute herpetic stomatitis to identify indicators
of local oral immunity before and after treatment.

This work is licensed under the Creative Commons Attribution International
License (CC BY). http://creativecommons.org/licenses/by/4.0/

We examined 62 children from 8 months to 3 years with

All children were divided into 2 groups:
1

moderate severity with 0.25% oksolin ointment against the
background of general treatment.

moderate severity who, against the background of general
treatment, used the drug "Kyzyl May" (polyphytic oil).

Polyphitic oil "Kyzyl May" is an oily extract of medicinal

plants, which has antiviral, anti-inflammatory, pain-relieving
and anti-bacterial action.

AHS proceeds with hyperemia, edema on the mucous

membrane of the oral cavity appear erosion and ulcers,
which are covered with white fur. Lesions are from 2-3 to 7-8
mm. Favorite localization of aft on the mucous tongue, lips
and transitional folds. The mucous membranes that are free
from erosion are edematous and hyperemic, the tongue is
coated with a white-gray bloom, a putrid odor from the
mouth, an increase in salivation is noted. Submandibular,
mental and cervical lymph nodes are enlarged.

treatment. General treatment used the drug "Acyclovir"
tablets in an age dosage. In the 1st group: local treatment was 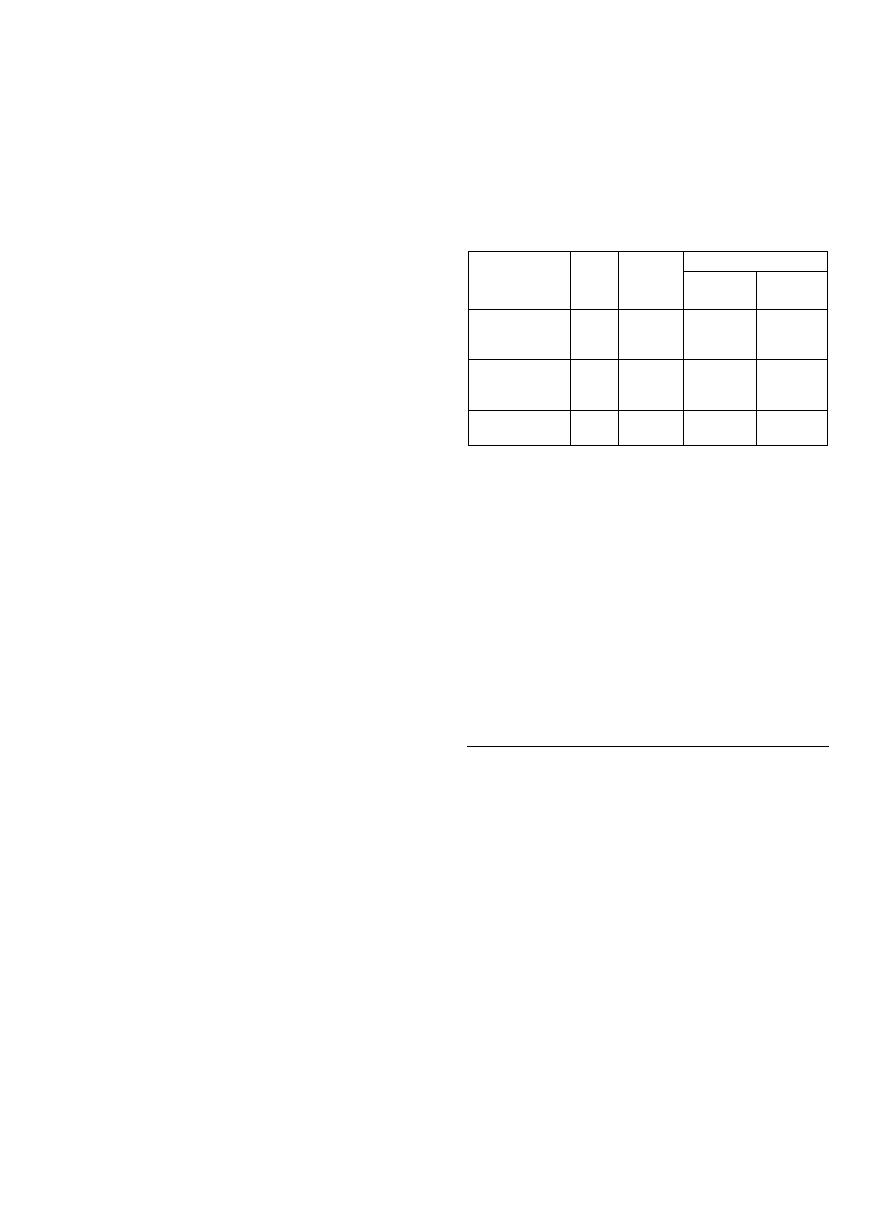 Clinical and Immunological Parameters of Oral Cavity in Children

started with antiseptic treatment of the oral cavity with
Furacilin solution 1: 5000 and application of OXOLIN
0.25% ointment.

2nd group: antiseptic treatment of the oral cavity with

Furacillin 1: 5000 and application with Kyzyl May.

Immunological studies were performed in all patients:

quantitative determination of local oral protection factors
such as the level of secretory immunoglobulin A, phagocytic
activity of neutrophils and the level of lysozyme in the oral
fluid. To determine the phagocytic activity of neutrophils in
the oral fluid, the collection and processing of saliva was
carried out in a modification Antonov A.V. (1996). To do
this, the selected oral fluid was cleaned, washed, buffered
solution and centrifuged at 1000 rpm for 10 minutes: the
non-settling liquid was drained, and 0.5 ml of physiological
saline was added to the sediment.

of latex suspension (5x108 in 1 ml) with a diameter of 0.8
mm was added. The mixture was incubated in a humid
chamber for 30 minutes at 37 °C. Subsequently from this
mixture smears were prepared by the type of blood smear
stained according to Romanovsky Giemsa. Not less than 100
neutrophils were counted with and without latex in each
preparation, the phagocytosis index was determined, i.e. %
of phagocytic leukocytes was counted.

The activity of lysozyme in the oral fluid was determined

by us using the method proposed by Aliev Sh.R. (2016),
which included the use of sterile paper discs. For this
purpose, oral fluid was collected on an empty stomach into
sterile tubes, then paper discs were taken with tweezers
(similar to antibiotic) and thoroughly soaked in oral fluid.
After that, these discs were placed on the surface of nutrient
agar (Mueller Hinton medium) in Petri dishes planted with a
lawn daily culture) were incubated in a thermostat at 37 ° C,
the lysozyme activity in the oral liquid was determined by
the diffusion method in agar.

Determination of class A immunoglobulin titer of

secretory fraction (s IgA). The method is based on the
Mancini method, which is based on measuring the diameter
of the precipitation ring formed when oral fluid is introduced
into the wells cut in an agar layer in which monospecific
antisera are pre-dispersed. Under standard experimental
conditions, the diameter of the precipitation ring is directly
proportional to the concentration of immunoglobulin.

decrease in bleeding of the gums, epithelialization occurred
on the 4th day after treatment. Aphthae epithelialized
more slowly, lymph nodes decreased, hyperemia, edema
disappeared, epithelization of the affected areas began,
gingival papillae took the correct configuration for 5-6 days.
Full recovery occurred on the 7-8th day. Patients of the 2nd
group who used the drug "Kyzyl May" on the 2nd day freely
opened their mouth and took food, as the oil contains licorice

root, which has analgesic properties. On the 3rd day after
treatment, epithelialization began, the gingival margin
became pink, the amount of saliva released decreased, the
duration of treatment was shorter by 2 days. It should be
noted that there were no allergic reactions to the drug.

Immunological indicators during the height of the disease and

Note: * - significant difference of the indicator in relation to “Before treatment”
by the Student's criterion at the level of p <0.05.

Thus, in our studies, it can be concluded that in children

with acute herpetic stomatitis in the oral cavity, an
immunodeficiency state develops, which further aggravates
the clinical course of the disease. On the basis of the obtained
clinical and immunological data, it is possible to conclude
that Kyzyl May is highly effective in treating acute herpetic
stomatitis. The data obtained allow us to recommend this
drug not only in the treatment of acute herpetic stomatitis,
but also in the development of various pathological changes
in the oral mucosa, in which there are inflammatory changes. 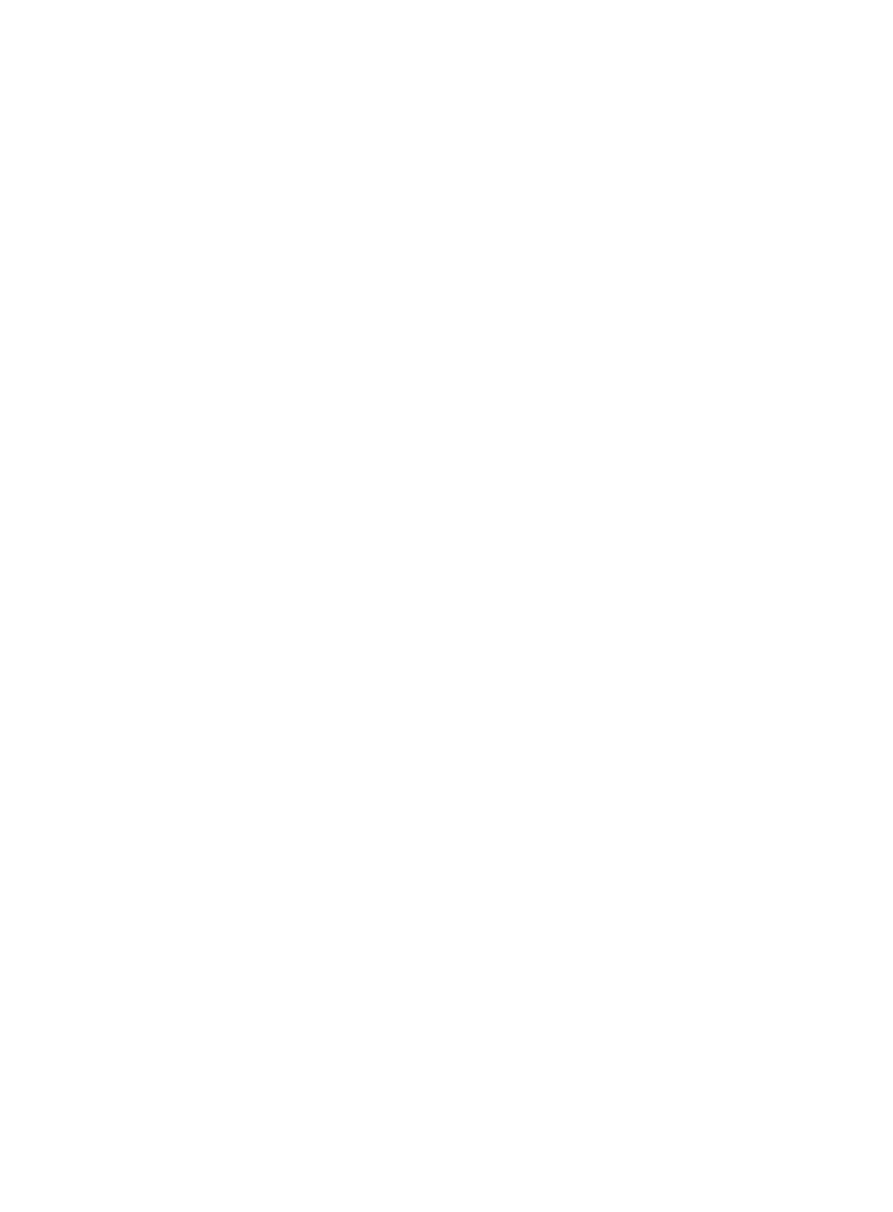