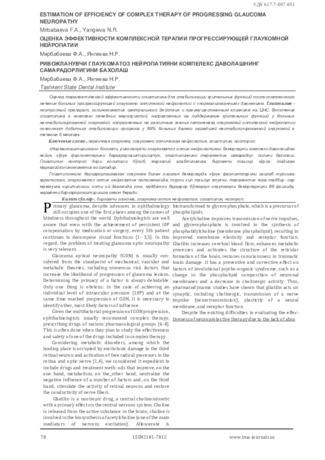 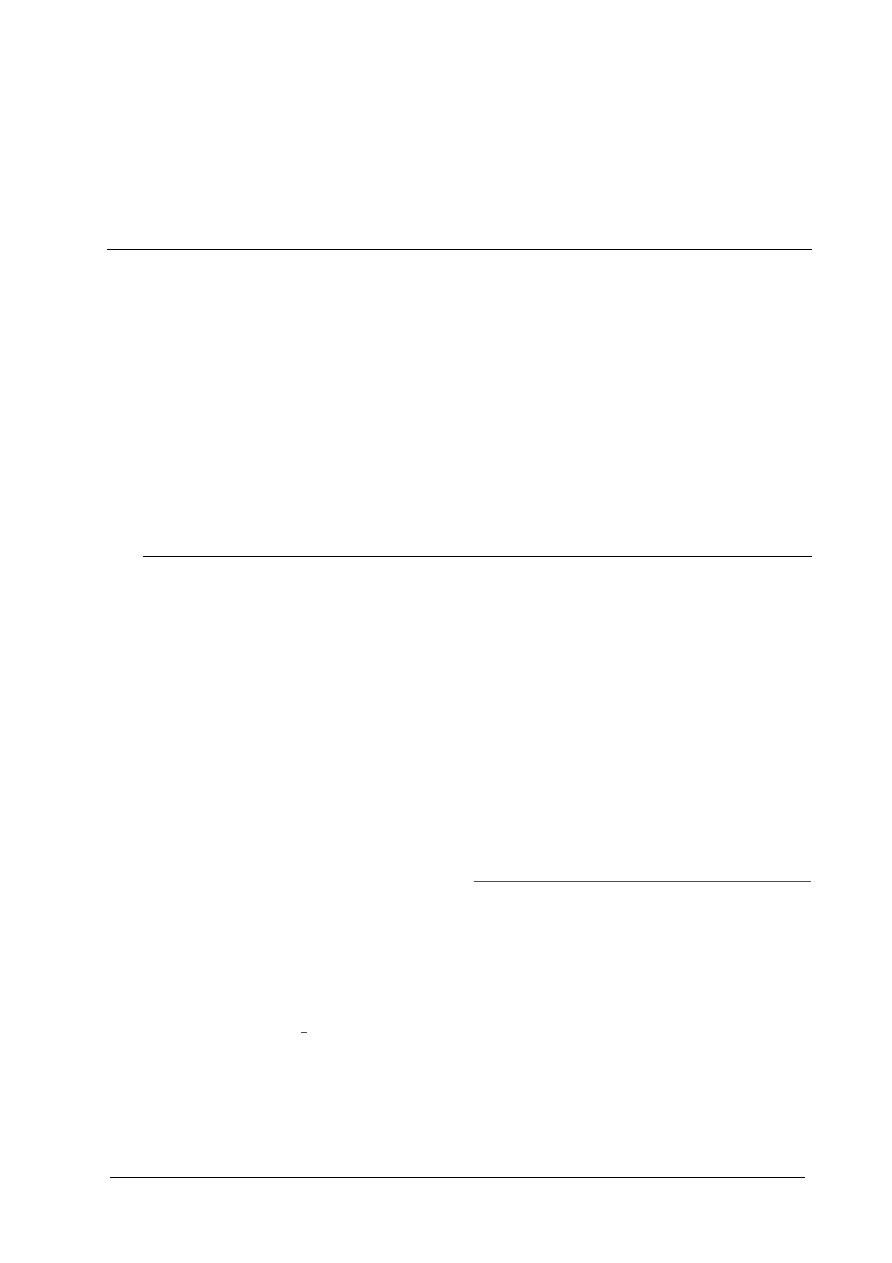 ESTIMATION OF EFFICIENCY OF COMPLEX THERAPY OF PROGRESSING GLAUCOMA
NEUROPATHY

rimary glaucoma, despite advances in ophthalmology
still occupies one of the first places among the causes of

blindness throughout the world. Ophthalmologists are well
aware that even with the achievement of persistent I0P
compensation by medication or surgery, every 5th patient
continues to decompose visual functions [1- 3,5]. In this
regard, the problem of treating glaucoma optic neuropathy
is very relevant.

sidered from the standpoint of mechanical, vascular and
metabolic theories, including numerous risk factors that
increase the likelihood of progression of glaucoma lesions.
Determining the primacy of a factor is always debatable.
Only one thing is obvious: in the case of achieving an
individual level of intraocular pressure (10P) and at the
same time marked progression of GON, it is necessary to
identify other, most likely factors of influence.

ophthalmologists usually recommend complex therapy,
prescribing drugs of various pharmacological groups [6-8].
This is often done when they plan to study the effectiveness
and safety of one of the drugs included in complex therapy.

Considering metabolic disorders, among which the

leading place is occupied by excitotoxic damage to the third
retinal neuron and activation of free radical processes in the
retina and optic nerve [1,4], we considered it expedient to
include drugs and treatment meth- ods that improve, on the
one hand, metabolism, on the other hand, neutralize the
negative influence of a number of factors and, on the third
hand, stimulate the activity of retinal neurons and restore
the conductivity of nerve fibers.

Gliatilin is a nootropic drug, a central cholinomimetic

with a primary effect on the central nervous system. Choline
is released from the active substance in the brain; choline is
involved in the biosynthesis of acetylcholine (one of the main
mediators of nervous excitation). Alfoscerate is

biotransformed to glycerophosphate, which is a precursor of
phospholipids.

and glycerophosphate is involved in the synthesis of
phosphatidylcholine (membrane phospholipid), resulting in
improved membrane elasticity and receptor function.
Gliatilin increases cerebral blood flow, enhances metabolic
processes and activates the structure of the reticular
formation of the brain, restores consciousness in traumatic
brain damage. It has a preventive and corrective effect on
factors of involutional psycho-organic syndrome, such as a
change in the phospholipid composition of neuronal
membranes and a decrease in cholinergic activity. Thus,
pharmacodynamic studies have shown that gliatilin acts on
synaptic, including cholinergic, transmission of a nerve
impulse (neurotransmission), plasticity of a neural
membrane, and receptor function.

Despite the existing difficulties in evaluating the effec-

tiveness of neuroprotective therapy due to the lack of abso 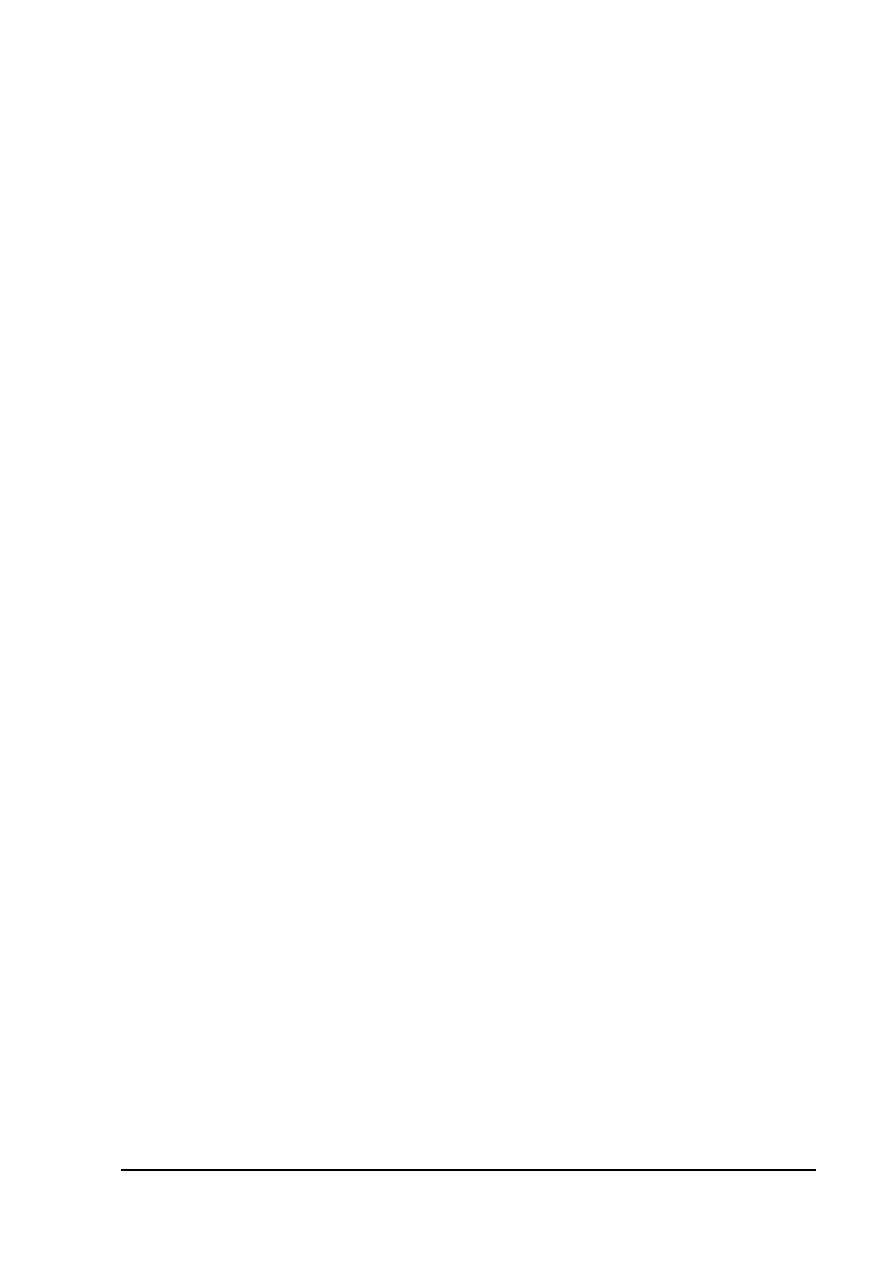 indicators, such an assessment is still possible.

The aim of this work

is to evaluate the therapeutic ef-

complex treatment of patients with progressive GON with

open-angle glaucoma in the advanced stage with
compensated intraocular

Patients of both groups

were comparable in age, concomitant somatic pathology, the
severity of the glaucoma process, their average age was

a predominant damage to the vessels of

The analysis of ophthalmostatus indices showed that in

both groups the majority were patients with advanced stages
of glaucoma: 71.3% and 73.6%, respectively. In the 2nd
group, patients

in which IOP normalization was

Therefore, in the latter there were more patients who
needed local antihypertensive therapy to maintain
ophthalmotonus within the target pressure. Nevertheless,
despite a steady level of IOP in the range of 15-17 mm Hg,
negative dynamics of visual functions was noted in all cases,
which served as the basis for the course of stabilizing
therapy.

When conducting complex treatment of patients, their

general somatic state was also taken into account. The
course of neuroprotective therapy included drugs of various
pharmacological groups acting on different pathogenetic
links. All patients received Mexidol 100 mg intramuscularly
1 time per day for 14 days, and patients of the 1st group, in
addition, were injected with gliatilin 1000 mg/4 ml
intravenously in an amount of 10 injections, then continued
the course of taking this drug by mouth 1 capsule 2 times a
day for 3 months.

A comprehensive ophthalmological examination was

carried out before, after treatment, after 3 and 6 months. The
following methods were used to assess visual functions:
visometry, perimetry, determination of the critical-
frequency of flicker fusion, eye rheography. Along with this,
a study was made of the electrosensitivity and electrolability
of the optic nerve and retina, and the registration of visually
evoked cortical potentials (VECP).

The state of the visual fields was evaluated in several

ways. Static perimetry was performed using a Humphrey
Visual Field Analyzer II (HFA II] 750i (Germany]. Depending
on the initial visual acuity and the degree of visual
impairment, a screening or threshold study program was
used. When assessing the central field of view (CTO], all
patients underwent correction of visual acuity near.
Screening was performed using the FF- 120 Screening
program using a three-zone strategy. The threshold program
for the study of the visual field included the application of
tests Central 30-2 in the study of the central lens (within

in the assessment of the peripheral field of vision - the

the same time, we

automatically by the device

therapy are not sufficiently

point of view of

- perimetry - remains the most accessible.

period in a hospital, during

in no case were adverse

was also normalized during

period and was at a level not

compared with the initial data].

One of the criteria for evaluating functionality is central

visual acuity. Neuroprotective therapy, as a rule, does not
affect this indicator, however, mention of it is important as
indirect evidence of the dynamics of the process.

In our case, central visual acuity remained stable. Some

improvement in vision was noted in some patients in both

One of the objective criteria for assessing the effec-

tiveness of neuroprotective therapy, to a certain extent, can
be considered a study of the visual field. The indicators taken
into account when assessing changes in visual functions, we
considered CPL, foveolar and total photosensitivity, PPZ,
indicators MD and PSD.

The study was conducted before the start of a course of

drug therapy and 3, 6 months after it. All average indicators
tended to improve, especially for the central and peripheral
fields of vision. Moreover, in the group of patients receiving
gliatilin, this trend was more significant. This is all the more
important since the initial data of both groups were
comparable. The boundaries of peripheral vision (the sum of

conducted before the start of a course of

months after it. All average indicators

improve, especially for the central and peripheral

fields of vision. Moreover, in the group of patients receiving
gliatilin, this trend was more significant. This is all the more
important since the initial data of both groups were
comparable. The boundaries of peripheral vision (the sum of
degrees

Against the background of an increase in visual func-

tions, we noted an improvement in hemodynamic

in the threshold of electric 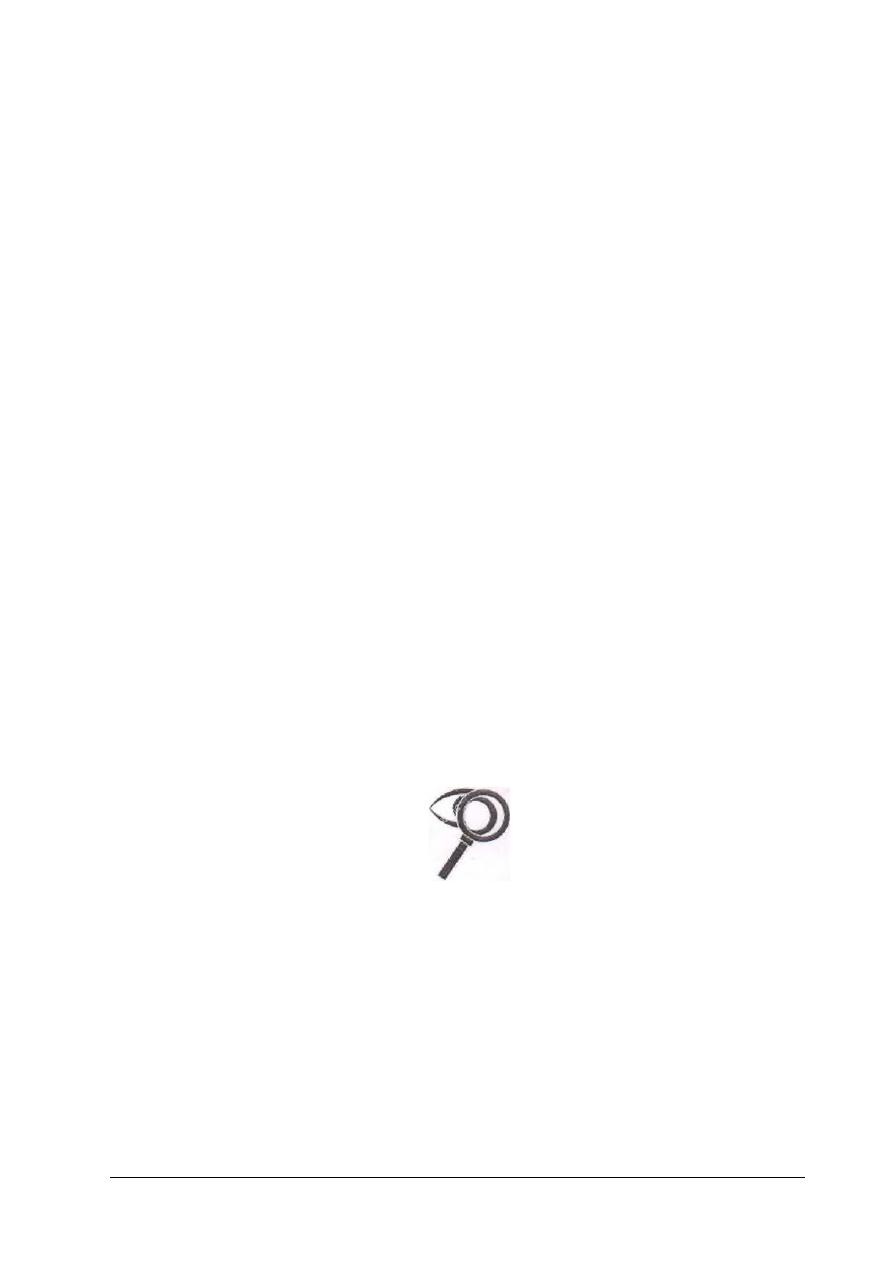 A significant increase in the index of electrolability of the

optic nerve was established by an average of 2.3 Hz after
treatment After half a year of dynamic observation, the
indicator is 3.5 Hz, which is 13% of the initial level, but this
difference is not statistically significant.

As a result of the treatment, a positive dynamics of the

state of visual functions was revealed according to the VECP
study. The amplitude of the P 100 component increased from

We are inclined to believe that a more pronounced

therapeutic effect in patients of the 1st group is due to the
action of gliatilin. This assumption is confirmed by the
observation of a large number of patients who periodically
receive similar therapy at the institute.

Thus, the inclusion of gliatilin in the complex of ther-

Thus, the inclusion of gliatilin in the complex of ther-

The frequency of the course of stabilizing therapy

depends on the effectiveness of the previous therapy and the
clinical manifestation of the glaucoma process.

dysregulation in the choroid of subjects with

ESTIMATION OF EFFICIENCY OF COMPLEX THERAPY
OF PROGRESSING GLAUCOMA NEUROPATHY

To evaluate the therapeutic efficacy of gliatilin for stabilizing

visual functions after complex treatment of patients with

pressure. Gliatilin is a nootropic drug, a central cholinomimetic

with a primary effect on the central nervous system. The inclusion

of gliatilin in the complex of therapeutic measures aimed at

optical neuropathy, makes it possible to achieve stabilization of

the process in 89% of patients with far-reaching unstabilized